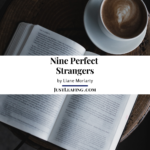 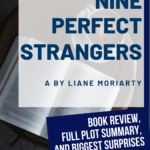 Nine perfect strangers put their faith that the health and wellness protocol they are starting will help them experience real, meaningful, lasting change.

But what if that new “protocol” isn’t quite what they signed up for?

Written by Liane Moriarty, Nine Perfect Strangers is a perfect example of the excellent writing I have come to expect from this prolific author.

There is a reason she is as successful and as popular a writer as she is. She is one of those writers it’s such a pleasure to read because you know you going in you are in good hands. You can pick up any of her books and sink happily into the story she is telling while she masterfully leads you through to the end.

As with her other books, Nine Perfect Strangers left me perfectly satisfied with the time I devoted to devouring it.

Whatever topic she is grappling with, Moriarity writes in a way that makes her characters before fascinating and inherently familiar as we find ourselves identifying with parts of each of them.

The disillusioned executive who throws off her old mantle to embrace a new, healthier lifestyle.

The romance writer whose insecurities are so easy to relate to. The mother of four who was left by her husband and now doesn’t know what to do next.

The family grappling with a tragedy no one should ever have to go through. Their details make them interesting, but their universal emotions make them oh so relatable.

It’s easy to see why Hulu wanted to adapt the book into a mini-series. Like her most famous work, Big Little Lies, which was made into a show on HBO, the pace and excitement of this book gives a filmmaker lots of room to tell the story visually.

That being said, if you want to watch the series, I do highly recommend you read the book first. There are enough twists and turns that you would be robbing yourself of those “aha!” moments if you didn’t.

As a reader, I am very grateful Liane Moriarty is prolific as she is, and that I can likely look forward to many more books by her.

What Happens in Nine Perfect Strangers

(Warning! Tons of spoilers ahead!)

We are introduced to two of our characters, Masha and Yao, as Masha is having a heart attack in her office and Yao is the paramedic in charge of saving her.

We flash forward 10 years where we meet our nine perfect strangers as they are entering Tranqulim House as guests for 10 days.

There is Frances, a romance writer who has devoted her life to her work and is now nursing a  broken heart after falling for an online romance scam.

Lars is a divorce lawyer who regularly attends retreats as a way to decompress and have time away from his partner and his pestering for a  baby.

The Marconi family, Napoleon, Heather, and Zoe are hiding away from the anniversary of their son and brother’s suicide.

Carmel was recently left by her husband for younger women and after  4 kids, is struggling with body image issues.

Ben and Jessica won the lottery, but now have little left in common to connect them in their marriage beyond the money.

Tony is a former football star who has spent the last 20 years in self-pity after his wife left, and wants to use the retreat to get back in shape. This is our nine.

The retreat starts off in silence for  5 days, and our nine are introduced to their beautiful and charismatic guide, Masha. Yao is here too and is fully bought into the religion of Masha.

The guests do things like yoga,  meditation,  things you would normally expect from a health retreat. What is unexpected is the secret micro-dosing of LSD they are receiving in their daily smoothies (the secret to Masha’s successful retreats).

Masha has grown frustrated though that the changes her guests experience aren’t permanent, so she decides to embark on a  new protocol that includes giving the guests a guided trip on  LSD, ecstasy, and magic mushrooms.

The guests figure it out before the session starts, but after they have already consumed the drugs.

They decide to go along with it, and when they wake up to find they have been locked in the yoga studio. They are told they need to work together to get out, and what is expected to take 2 hours ends up taking more than 2  days.

Yao tries to let them out himself but is sedated by Masha to keep from interfering.

Masha at this point has lost her own grip on reality and is dosing herself to “help her think more clearly”. She decides to scare the guests by pretending the house is on fire and make them face their own mortality.

Luckily, they figure out it isn’t real and the door is actually now open. Masha has disappeared, and the police are called in.

The guests go their separate ways, and despite everything, actually feel improved by their experience.

Frances and Tony find love together.

Ben and Jessica lovingly separate after the trip, making it clear they don’t want the same things anymore.

The Marconis are able to forgive themselves for their son’s death, and Zoe and Ben begin a friendship that is likely to lead to more.

Carmel learns to love herself more fully and becomes ecstatic at the shared help her ex-husband’s new wife wants to provide.

Masha goes on to lead secret dosing sessions to executives who pay through the nose for the privilege, and Yao finds love and family with an ex-fiancee.

All in all, happy endings all around.