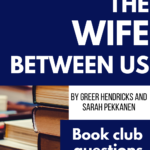 Discussing these The Wife Between Us book club questions with your reading group, you may notice an overall theme. Namely, how in this book things are so often not what they seem.

In Vanessa and Richards’s marriage, they tended to see things very differently. Add in a mistress and a controlling older sister, and their ability to communicate is completely shot.

Given his treatment of her, you can definitely argue this was a failed marriage long before they ever said: “I do”.

Watching the evolution of who is to blame throughout the book is thrilling, and really keeps you on your toes.

The sympathy you feel for Richard in an early chapter is completely erased as more of the story comes to light.

Likewise, with Vanessa, you might feel she contributed to the end of her marriage… And she did, just not in the way you might have thought.

With so many many twists and turns, I would encourage you to take notes on what happens in the book (or you can read The Wife Between Us summary here).

You will definitely want to have the story all straight in your head before tackling these The Wife Between Us book club questions.

Still not sure this book is right for your reading group? Check out a full review of The Wife Between Us here.

The Wife Between Us Book Club Questions

1. You are almost halfway through the book before the first plot twist where you realize Vanessa and Nellie are the same people at different times of her life.

What was your impression of Vanessa at first? How did you feel about her? Did finding out she had once been Nellie change your opinion?

2. Richard at one point says, even when I am not there, I am always with you. How does the meaning behind this change throughout the book? Was it ever a romantic notion, or did it always feel sinister?

3. We know immediately from the prologue that Richards’s fiancee is being watched.

“She is oblivious to what I have done to her. “She is unaware of the damage I have wrought; the ruin I have set in motion.

To this beautiful young woman with the heart-shaped face and lush body—the woman my husband, Richard, left me for— I’m as invisible as the pigeon scavenging on the sidewalk next to me.

She has no idea what will happen to her if she continues like this. None at all.”

Did that passage excite you for the book? What did it make you suspect was coming?

4. The book mentions a couple of different times a person’s ability to sense if they are being watched, or hunted, or just to know when something is off.

Have you ever experienced anything like that? What were the circumstances?

5. Nellie’s friends try to be supportive of her marriage, but they have a hard time with it (and as it turns out, for good reason).

Nellie dismisses it as their not understanding where she is with her life now, their experiences are so different.

Do you think the challenges of being in different phases of life is a real thing friendships face? How much of Nellie’s disconnect with her friends do you think can be attributed to that?

6. Vanessa feels incredibly guilty because of what happened to the pledge she was supposed to be watching. Do you think that kind of trauma is ever gotten over?

She did ask someone else to look out for her the girl, but she still blames herself. Would you feel the same way?

7. Looking back on it, Vanessa sees all the small ways Richard tortured her, like blindfolding her when he knew she was scared of asking her questions he knew the answer to see if she would lie to him.

Do you think she should have seen the signs of gaslighting her earlier? What were the first clues in the book that made you think that might be what’s happening?

8. Vanessa gets out of her marriage by inception the idea for Richard to leave her. Until the last minute, she didn’t feel guilty about setting up another woman.

Does how hard she tries to make it right make you feel sympathetic to her? Or was she only thinking of herself?

9. Richard gifts Nellie Duke the German shepherd as a gift to protect her, then he mysteriously disappears when she bonds too much with the dog.

Have you ever seen people who get jealous of pets or even children, where they feel like they are replaced? What do you think Richard was hoping for when he first gifted the dog?

10. Towards the end of the book you get the suspicion Richard’s sister is delighted to be needed by him again and to be the only one in his life.

Did that interaction make you feel any sympathy for Richard, like maybe how he was raised meant he never really had a chance? Or is that irrelevant based on how he treated people?

11. The final reveal is who Emma really is. Did you ever suspect she was from Vanessa’s past? What tipped you off?

12. How did you enjoy Greer Hendricks and Sarah Pekkanen’s writing style? Did it make you want to read more books by them?

Did you read The Wife Between Us for your book club? What did you think? Leave me a comment below about how the questions and book worked for you!