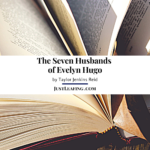 There are certain authors I keep coming back to because you can trust that when it comes to writing a story, they will engage you from beginning to end.

Taylor Jenkins Reid is one of those authors, and The Seven Husbands of Evelyn Hugo was the first book of hers I ever read.

I think you will see why it kicked off a need to read everything else she has written too!

The Seven Husbands of Evelyn Hugo is a Beautiful Book

The Seven Husbands of Evelyn Hugo

Society has long been obsessed with the lives and scandals of Hollywood and its stars.

You only have the look at the popularity of the Kardashians, the ultimate example of those who are famous for being famous, to know it’s as true today as it was at the beginning of Cinema.

The rise of the internet and instant news has made Old Hollywood “faked” relationships harder to pull off. Still, the public’s insatiable need to consume and devour anything and everything about their idols has been around since the Golden Age of Cinema starting back in the late 1920s.

A New York Times Best Seller, The Seven Husbands of Evelyn Hugo follows a fictitious bombshell of a movie star through those different worlds of Hollywood from the Fifties to the Eighties, and the husbands she gathered along the way.

I confirm here she IS fictitious because author Taylor Jenkins Reid did such a good job in building the character of Evelyn Hugo that one of the most asked questions about the book is “Is Evelyn Hugo real?”. Sadly, no, but it is so easy to believe she is (and really, to wish she was).

Though she herself isn’t real, the influences of icons like Marilyn Monroe and Elizabeth Taylor are plain to see.

The book almost feels like an imagining of where they might have ended if they had continued their careers into their old age, transitioning from the young ingenue to the sexy siren to something else entirely.

So few actresses in real life are ever able to hang on to popularity that long that it is endlessly captivating to read about one who has (imagined or not).

As with other Taylor Jenkin Reids novels, her writing is first-rate and highly readable. What feels like a story that might be straightforward in its telling is anything but due to her expert craftsmanship in laying out the plot, characters, and keeping you engaged.

You know there is a secret to be revealed and even still, you are smacked down at the end with what it is.

I don’t want to spoil the ending here for those who want to read this highly worthwhile book. I will just say though that having read a ton of books that work hard to make you care about their ending only to squander it on something cliche, this book is not that.

It’s a satisfying and highly enjoyable read from beginning to end, though not without its sad and poignant moments. Its strongest message is how pointless it is to live for anyone other than yourself, and that’s a message I can support.

I strongly recommend you read The Seven Husbands of Evelyn Hugo and see for yourself!

Who Were Evelyn Hugo’s Husbands?

As the title of the novel suggests, Evelyn was married seven times in total. In all that time though, she only had one true love. Here are all of Evelyn Hugo’s husbands in order from first to last.

Husband Number One: Ernie Diaz. Evelyn marries him at fourteen in order to get her first break into Hollywood.

Husband Number Two: Don Adler. A huge movie star who helps her career in public, but abuses her in private.

Husband Number Three: Mick Riva. Evelyn marries him to protect her career against the scandal of her real love, though she quickly leaves him to go back to her lover.

Husband Number Four: Rex North. A co-actor on a movie they need to ensure is a hit, they get married as a publicity stunt.

What is The Keeper Of Happy Endings All About?

Is It Ends with Us Based on a True Story?

It Ends with Us Book Club Questions

Conversations with Friends by Sally Rooney

Husband Number Five:  Harry Cameron. The one who discovered her and her oldest friend, he is gay and they marry to help protect them both.

Husband Number Six: Max Gerard. A Hollywood film director who she marries to forget about her real love and lover

Husband Number Seven: Robert Jamison. The older brother of Celia St. James, whom she marries so that Celia can leave Evelyn her estate when she dies.

Her one true love: Celia St. James. Her lesbian lover on-and-off for years until Celia dies of the long-term effects of smoking. They are together and living a simple life in Spain when it happens.

Will The Seven Husbands of Evelyn Hugo Be a Movie?

After a false start with being adapted by the production company Freeform, the author Taylor Jenkins Reid confirmed that the movie would be adapted on another platform. Whether that means Netflix, Hulu, or what is anybody’s guess at this point, we do know it is definitely in the works!

In the meantime, fans are having a field day speculating on casting for the film, especially the husbands! Only time will tell if they got any of this dream casting for the Seven Husbands right.

If you are looking for more great books, The Seven Husbands of Evelyn Hugo also makes my 5 of the Best Books to Read on a Beach Vacation list. Check it out for more options!

Did you read The Seven Husbands of Evelyn Hugo? What did you think?

Leave a comment below, as I would love to hear your thoughts about what you did (or didn’t) like about it!