The Swimmers by Julie Otsuka is unlike any book I’ve read in a very long time.

It’s also very unlike the kind of book I would normally finish or enjoy. But almost despite myself, I found I did both.

Whether you are looking for your next great read or are planning to read The Swimmers with your book club, I don’t think you’ll be disappointed.

The Swimmers Is a Short but Piercing Novel 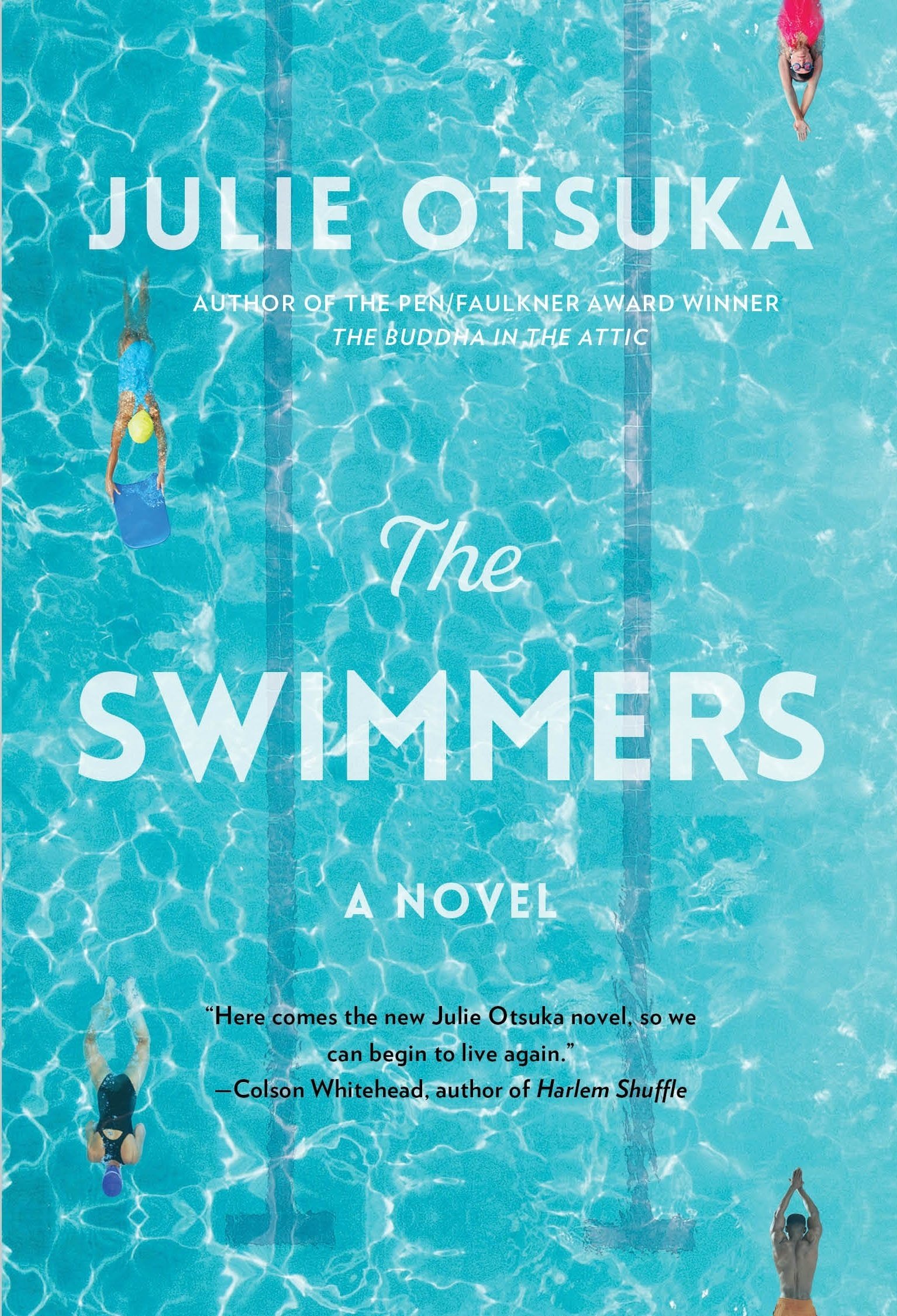 192 pages of lists, factoids, and snippets of the day of a group of swimmers who frequent a recreational pool.

The story (if you can even call it that) emerges slowly as you hear a woman named Alice mentioned from time to time. As one of the swimmers, she is left at loose ends when the pool closes.

You also realize that she is having memory problems that are only made worse with the closing of the pool.

Most of the story is told in observation by an unnamed omnipotent narrator describing (in very exacting detail) the members of the pool.

All the tiny details that make these strangers different, aside from the one thing that bonds them together: the pool.

The second half of the story is told by Alice’s daughter, who watches her mother’s slow fall into a loss of self as her memory slips away.

The way people can bond over a similar obsession is so fascinating to see play out. As someone who also uses physical activity as a way to reset, the mentalities of all these swimmers are easy to relate to.

How the fact that no one will ever quite understand their need to swim like the other swimmers.

Or the way that when stripped of that underwater freedom they are left feeling without a home.

It sounds so grandiose and exaggerated as a reaction, but it isn’t at all.

As Otsuka points out, it’s the little things like your swim routine that give a life structure and meaning.

It is a heartbreaking story but also feels so familiar in its ordinariness.

A child watching their parents age and mourn all the time they didn’t spend together (it’s never enough) happens on a daily basis.

But that’s a lot of what the story gets so right. The ordinary is incredibly important when it’s happening to you.

As I said, the book is short, and necessarily so. Julie Otsuka’s meandering writing style is incredibly beautiful and evocative, but I can’t imagine the book being longer.

It’s almost more impressive how impactful she is in less than 200 pages. Its length also makes it a great choice for any reading group. If you are looking to discuss the book, check out these The Swimmers book club questions to get started.

Overall, you are unlikely to read another book quite like The Swimmers. Even if the style is not your cup of tea (and I wholeheartedly agree it’s not normally mine either), it’s so unique that you should give it a read anyway. If it hits you just right, it will make you feel a lot of things.

And what more can you ask of a good book?

The book is honestly jam-packed with quotes I had to reread over and over again.

But since I couldn’t highlight the whole book, these are the quotes that really stood out to me.

“And for a brief interlude we are at home in the world. Bad moods lift, tics disappear, memories reawaken, migraines dissolve, and slowly, slowly, the chatter in our minds begins to subside as stroke after stroke, length after length, we swim.

“But to all of those who have left us—willingly, unwillingly, or under duress—we just want to say: you can come back anytime and slip back into your old lane.

We won’t ask you any questions (“Where were you?”). We won’t hold your absence against you. We promise to greet you warmly, but respectfully, and with a minimum of fuss.

“Nice to see you again,” we’ll say, or “Been a while.” But keep in mind that the second time you leave us, there is no coming back.”

Is The Wife Between Us Worth Reading?

Is Conversations with Friends a True Story?

What is Layla by Colleen Hoover all about?

“This can’t be happening to us. Because isn’t this the sort of thing that usually happens to other pools? Weren’t we supposed to be—hadn’t they always told us we were, hadn’t they promised—special? Different? Immune? Exempt?

Or, simpler yet —pediatric oncologist Min-hee in lane seven—a case of plain dumb bad luck? Empty nester Yolanda pushes her goggles up, aviator style, onto her forehead, and says, “Everything is loss.”

“Later, your mother says, “Didn’t everything used to have a name?”

But after having finished and been stunned by the Swimmers, I immediately knew I needed to read all her other books as well.

Julie Otsuka has written two other award-winning books that both have won several awards.

Her first novel, When the Emperor Was Divine, is about a Japanese American family during WWII that is held in an internment camp.

Otsuka has said the story is loosely based on her own family’s experiences. The book won the Asian American Literary Award in 2003 and the 2003 American Library Association Alex Award.

Her next novel, The Buddha in the Attic, went on to become a national bestseller. It also won many awards, including the prestigious PEN/Faulkner award.

A story of 8 “picture brides”, Otsuka’s novel follows them on their journey to meet their new husbands in San Fransisco after only having seen their photographs.

Did you read The Swimmers? What did you think of it?