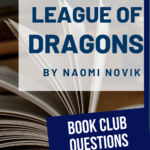 Whether you have a book club dedicated to only fantasy books or have just introduced this one series into the mix, my recommendation is the same.

League of Dragons is a fascinating book to discuss with any reading group using these book club questions.

The seriousness of the Napoleonic wars set against the whimsy and surrealism of Dragons makes for a delightful contrast you can really dive into.

And I highly recommend you do!

The epic story of Temeraire the Dragon spans nine (9!!) books and ends with this final piece of the story, League of Dragons.

Author Naomi Novik has an incredible talent for reimagining the world, but with a slight (and often magical) tweak.

In this series, she reimagines the very real story of the Napoleonic wars. But with Dragons.

Along with the usual soldiers in the Infantry and Navy, there is also an Aerial corps that fights from dragon-back.

The whole story of Temeraire begins when a particularly special dragon egg hatches for a Navy captain who never planned to be in the Aerial corps.

The rest of the books follow the war and their efforts in it, culminating in this final book where they finally defeat Napolean and can think about what’s next.

While this book on its own is not my favorite from the series, it does provide a satisfying closure to an epic tale. That’s a good thing too because, by the ninth book, you are pretty invested in the characters.

While none of the books top the first one that introduces us to Temeraire and Captain Laurence, for fans of fantasy and the magical the entire series is well worth the read.

Many of these book club questions could also apply to the earlier nine books, so if you are looking for questions for the whole series, these should also cover you.

Enjoy reading League of Dragons with your book club!

1. The alternate world League of Dragons is set in looks very much like our world, except there are Dragons who sometimes fight in our wars.

How does this change impact Napolean’s war, and the rest of the world’s response to him?

2. The military hate Laurence for having given the Cure to the rest of the dragons in the world, instead of letting them all die and maybe ending the war earlier.

Do you think like they do that “duty to country” should outweigh everything? Or is there another moral code as a human (or dragon) that sometimes needs to come first?

Would you have “committed treason” and done what Laurence did? Was it actually treason in your opinion?

3. The different countries in the book all have varying standards for how they treat their Dragons.

The Russians use cruel devices to keep them pinned down, whereas the Chinese exalt and almost worship their dragons.

What do you think led to the different approaches and mentalities around the treatment of dragons around the world?

4. Duty is talked about frequently in all of the Temeraire books. What are the biggest examples of people or dragons performing their duty?

Are there any examples of their duty being ignored?

6. In the Aerial corps, getting married and having children isn’t really done, since it can conflict with the relationship a captain has with their dragon.

Does this way of doing things make sense? Why or why not?

8. We learn the Sapa Inca, Napoleon’s Empress, made a deal to allow Napolean to be captured if it meant her son could stay on the throne of France (with her as regent).

Do you accept the excuses she gave to Laurence for why she did it? Do you agree that anything less and Napolean would have started another war?

9. One reason Napolean was so popular with the world’s dragons was he treated them differently than most other countries.

In what ways did he make changes for the dragons? Do you think those changes were motivated by selfishness or real concern for dragons? Does his motivation actually matter?

10. Laurence was always despairing of the “farce” that made him a Prince of China, and the next emperor’s “brother”.

Do you think political appointments like that are less real? Or are they a genuine tool for diplomacy? Why or why not?

11. Laurence and Temeraire finally have time to rest after the war, but it seems like they are going to go live on Tharkay’s estate so that Temeraire can stand for Parliament.

Is this what you expected their next move to be? How did you envision the series actually ending?

12. Would you ever reread Naomi Novik’s Temeraire series? Why or why not?

13. Are there any questions from the book you are still thinking about? What are they?

Get a copy of these book club questions as a PDF below.

Looking for your next book club pick?

Did you read League of Dragons for your book club? What did you think? Leave me a comment below about how the questions and book worked for you!