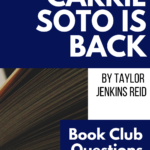 There is not much more I can say about Carrie Soto Is Back then this: WOW.

If you are looking for your next reading group pick, look no further. These book club questions for Carrie Soto Is Back will have you diving deeper into the text than Carrie herself diving to connect her racket with the ball to score the championship point at the US Open.

Best-selling author Taylor Jenkins Reid’s work is no stranger to the book club circuit. Her past novels like Daisy Jones and the Six and The Seven Husbands of Evelyn Hugo are both books that topped the New York Times Bestseller lists.

They are also books about heroines who swept through their respective scenes causing glamorous chaos in their wake.

Carrie Soto is no different.

A hard character at first, she brings a single-mindedness to her emotional story that has you unable to put the book down. A ruthless former champion, she strives to do the impossible by winning a Grand Slams event at thirty-seven years old (after 5 years in retirement no less).

This monumental decision has you bleeding your heart out for her as you get fully invested in her quest to be an (even more) legendary athlete. And what a quest it is! This might have started off a new obsession with sports novels for me.

Seriously, do yourself a favor and skip whatever you were planning to read next and read Carrie Soto Is Back with your book club instead.

Whether you were a tennis fan to start or not, you won’t be disappointed by this powerful novel.

1. Carrie dominated in a sport where by the time you were in your 30’s, you are likely on the decline athletically.

What does her intention to come back to defend her record tell you about her right from the jump? How does it shape your opinion of her?

2. There are a lot of very specific details about tennis in the book. Did you enjoy the details as a way to really see the games being played? How did it make you think (or change the way you think) about the sport?

3. Part of the story is told by the sports media and through commentators’ transcripts. How did you like that style as a device? What does it add (or take away) from the narrative?

4. There is a lot of made of Carrie’s attitude when competing, to the point where she is given the nickname “The battle axe” and “The B-word”.

Where do you think her attitude serves her in competition? Where does it let her down?

5. As a society, we don’t always treat aging very gracefully and there is a lot of pressure to stay young. How do you see that reflected in sports? Does this color the way you see attempts to hang on like Bowe Huntley and Carrie?

6. One of the most important relationships in the book is the one between Carrie and her father, Javier “The Jaguar” Soto.

How did you connect to that relationship? Was there anything in their history you felt particularly resonated with you?

7. At Wimbledon, the male winner makes light of Carrie’s win because he sees what she does as easier than what she does. How do you see that attitude reflected in sports today in the Tennis world? In other sports?

“One of the great injustices of this rigged world we live in is that women are considered to be depleting with age and men are somehow deepening.”

8. Carrie talks about the “hum in her bones” when she is fully in the moment and knows she will be able to control anything that comes at her.

Have you ever experienced that kind of feeling? How did it feel for you? Explain.

9. Carrie was on a quest to defend her record in having the most Grand Slam titles in history because she couldn’t make peace with the not being the greatest tennis player “in every metric”.

What do you feel the cost of greatness as a female athlete has cost Carrie in other aspects of her life?

10. As the best female tennis player in the world at one time, Carrie competes on some of the most famous tennis courts.

Which of the four games was most vivid to you? What meaningful details of the blow-by-blow descriptions of championship matches stood out to you?

11. Nicki Chan’s rivalry with Carrie pushes them both to be the best player they can be, and it’s ultimately what leads Carrie to play her epic final season.

What do you think it is about having a competitor that changes the way we work? Are there areas of your life you wish you could have a rival like Nicki Chan? Why?

12. When Carrie finally loses her record, she finally feels free to be something else. How do you think expectations for ourselves (or from others) shape us?

How does letting those expectations go change us?

“When did I lose that? The delight of success? When did winning become something I needed in order to survive? Something I did not enjoy having, so much as panic without?”

13. Do you think about tennis differently after reading this book? How?

14. What scene resonated with you the most from the book?

15. Did Carrie Soto Is Back make you want to read other Taylor Jenkins Reid books? Why?

Carrie Soto Is Back book club questions are available as a PDF below to download or print.

It Ends with Us Book Club Questions

The Last of the Moon Girls Book Club Questions

Did you read Carrie Soto Is Back for your book club? What did you think? Leave me a comment below about how the questions and book worked for you!